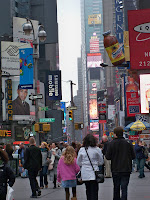 This past week I spent in NYC.  It was my first time and I cannot even accurately share my excitement.  My mom and I attended two broadway plays (Mamma Mia & Phantom) and did *so* much shopping.  We had to sit on our suitcases in order to zip them up and were thrilled that the airlines didn't weigh them (there's a charge of $50 per bag if it is over 50 pounds - hey, books and purses start to add up!)

I don't know where to begin, yesterday was my first day home, and
I'm still digesting the whole experience.

Okay, I come from a place that is filled with B&N and Borders.  We have one independent bookstore in the city and it's not in a very convenient location so I've only been once. To be in a city that had three or four printed pages of bookstores made me want to swoon.

For all of you New Yorkers, I am completely jealous of The Strand bookstore, which advertises itself as having 18 miles of books.  (I believe it!) Mom and I got off of the bus; she went to
the shoe store and I crossed the street to the bookstore.  This is a fair representation of our uniquely different interests as she's not a reader AT ALL!  Outside the doors, the Strand was having a bookstore - each book a dollar!  Yup.  I couldn't believe it my luck.  I held back though, knowing that we had a long day ahead of us and eventually everything that I purchased would have to be packed. I ended up picking up one paperback, a cute messenger bag, and a blue tee.

The other bookstore that stands out is Shakespeare & Co. This bookstore isn't nearly as big as The Strand, but it has a wealth of cool books that the regular conglomerate chains generally don't carry.  (Plus there was the sweetest cat ever hanging out). The ambiance is appealing and I could have easily hung out for hours. I even picked up a copy of The Onion in the foyer.

Because there was so much to do, I had to make a difficult choice: The Morgan Library and Museum or the MET.  The book nerd in me eventually won over, so on morning three Mom and I walked over to the MLM, paid admission and hung out in the glorious wall-t0-wall library owned by the late Pierpont Morgan's. I am sure that I missed out not going to the MET, but to be in the same room with manuscripts of Dickens, Austen, Bronte, Einstein, Lincoln, Thoreau, Steinbeck, and Milton...well, I just wanted to curl up with my own book and pretend that the study and library was my home. 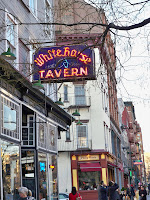 After a long day of wandering around in the Village, Mom was patient with me while I attempted to find The White Horse Tavern - a popular bar for many literary figures that I've come to admire.  Our feet ached and we were a bit hungry, but our determination prevailed and we finally found it.  I was not disappointed.  It was exactly how I pictured it.  The bar area was small, a bit crowded, regulars at the bar, and dimly lit (there is a side room, "The Dylan Thomas" room where patrons can sit and eat as well, but it was awfully warm on that side of the bar). We stayed long enough for a beer ($6.50) and an order of fries (the bar had a minimum charge of $8 per person, oh and they only accept cash). Some of the really cool people who used to hang out here?  Hunter S. Thompson (it's said that he began The Rum Diary, whose opening line is: "My apartment in New York was on Perry street, a five minute walk from the White Horse.."); it is rumored that Dylan Thomas drank himself to death there (18 shots of whiskey!); Jack Kerouac would often get so drunk that he'd get kicked out of the bar;  Dan Akroyd walked in at closing time the night that Belushi died, closed the doors and bought everyone a round of drinks; and the list goes on and on - Anais Nin, Norman Mailer, Andy Warhol, Allen Ginsberg, and James Baldwin.

Books
All in all, NY was a real treat, and even though I just got back, I'm dying to go back.  Finally, the books that I picked up while in the city:

Allrighty - I have a lot to do this Sunday.  It's not going to be as relaxing as I'd like.  Lots of errands and then I must figure out what I'm doing tomorrow with my classes.  I sort of put off lesson plans.  Didn't think about school once this week!  Hope all you Saloners have an enjoyable day.
at 9:05 AM