Hands down my favorite quote from the whole tale.

Er, well, at least one of them.

It’s interesting having watched the film so many times [enough at least where I feel as though I’m competent to answer some mad crazy trivia] but having little recollection of reading the book. And then the experience of rereading the book when I am much more familiar with the FILM only adds to it. Because, truly the story comes to life in a way that books don’t normally do for me.(1)

I was probably in elementary school, nearing the 4th or 5th grade when I first saw The Princess Bride: The Film. I wasn’t completely boy-crazy in real life, but my eyes were definitely on some Bop Magazine beaus. So lemme tell you, when Westley whispered “As you wish” he was golden in my book.

And then one day, while frequenting the used bookstores (Mom felt that the cost of new books in addition to how quickly I devoured them would put her in the poor house) I found a copy of The Princess Bride: The Book. Man oh man was I incredulous. MY FAVORITE movie had a book? I even wrote to Mr. Goldman(2) vehemently declaring – which means there were plenty of exclamation points – that he was MY FAVORITE AUTHOR EVER.

High school went by and both The Princess Bride: The Book & The Movie were nestled safely in the back of my brain until The College Years when I stumbled upon People Like Me and we would greet each other with: Hello. My name is Inigo Montoya. You killed my father. Prepare to die. Followed by an ambush of giggles.

Now I’m an adult and I fell in love all over again with The Princess Bride: The Book, but for different reasons entirely. There were so many things that I didn’t really pick up on as a kid. Like Goldman as the narrator. And how the author Morgenstein is a total fake out. Because really….that just hit me like a torched R.O.U.S. I seriously had to search out the netosphere double checking the facts of that one. Brilliant man. Absolutely freakin’ brilliant.

There are some books that people read as a child and then reread only to find that the memory of the book was sweeter. [3] In this case, the book allowed me to fall back into the world of Westley and Buttercup and stay there at my own pace.

My only meh about the experience, and it truly could have been avoided if my curiosity didn’t get the best of me was the addition of Buttercup’s Baby. Not a fan. At. All. 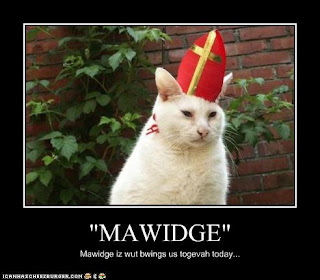 _____
(1) I think the cast for the film version was tres magnifique. Andre the Giant? Um, hell yeah.
(2) Sad face. He never wrote back. I was dismayed for quite some time.
(3) I admit, this normally happens with television shows more than anything
at 7:00 AM