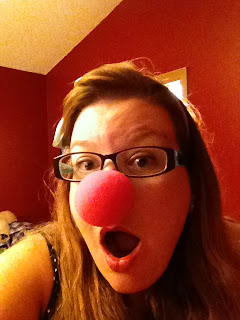 So you know that saying, it's all about the  journey not the destination? Well, that's how I KINDA feel about the whole #italong because there were many things that I really dug about the book IT but the community behind #italong and the amazingness of Steven Weber narrating it made it twelve shades better.

The thing about IT is it truly is your worst nightmare.  I loved that as a scary concept.  I tweeted to Care that he was the clown version of Freddy Kruger because It moves into whatever might frighten us the most - or use whoever might frighten us the most.  THAT'S what makes it horrific, the particularness to the victim makes it nearly impossible to battle.  Unless you stick together...which is what this book is ALSO about.

I love how King brings about community also and the importance of it.  I'm basing this merely on my experience with #standalong and #italong but there's a definite vibe that you can't battle life's evilness by yourself.  You have to count on people; you have to form a tribe.  I wonder if that's why most of his books are set in small towns?

So we have this group of kids who come together as children because they were unaccepted by others.  Unable to deny the supernatural forces that are taking over their hometown, Derry, they join together to fight the evilness.  IT is told in both flashbacks and present day scenes, and although that had the potential to be confusing, unnecessary, over the top but it didn't.

However, I am totally with the majority that Mike and his lemme tell you a story narratives on Derry history DID turn into snore fests.  Even though Weber was this amazing narrator, my mind would wander during these excerpts.  I imagine, if I'm going to be honest with myself, I'd probably do a lot of skimming had I read the actually book.

I know also that the Bill & Bev thing irritated many readers for various reasons (why throw the s3x ball in there; what about the fact that both were married - even if only one was happily, who has s3x when THIS is going on, etc.) but it KINDA made sense to me.  I mean, I can see how these people are in this emotionally charged moment in their life where they don't know if they're even going to make it and they're surrounding by nostalgic memories ESPECIALLY Bill and Bev.  They had a connection.  *shrug* it makes sense that they worked it out, so to speak, through a little bowchickabowwow.

However the tween group-on, well...I'm not even going to go there.

Also, I thought the ending was a bit anti-climatic.

Another thing that I found interesting was my middle school self compared to my adult self.  See, I read both The Stand and It in middle school and as a kid I hands down would have said that The Stand was the superior work, however now?  Well, I don't know about superiority but I definitely liked IT much more.  The characters were very attainable.